Film / What's the Worst That Could Happen? 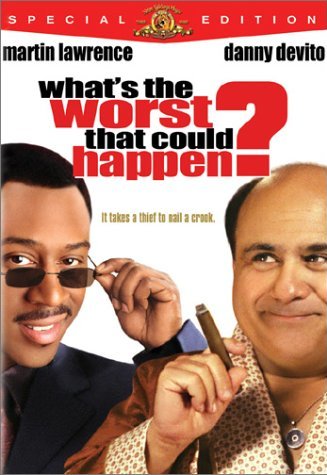 What's the Worst That Could Happen? is a 2001 American comedy film directed by Sam Weisman and starring Martin Lawrence and Danny DeVito. Loosely based on the Dortmunder novel of the same name by Donald E. Westlake, the film's supporting cast includes John Leguizamo, Bernie Mac, Larry Miller, Nora Dunn, GQ, and William Fichtner.

Thief Kevin Caffery attempts to rob from the home of rich businessman Max Fairbanks. But Fairbanks catches him and steals Caffery's cherished ring that his girlfriend gave him. Caffery is then bent on revenge and getting his ring back with the help of his partners.

Tropes in What's the Worse That Could Happen? include: