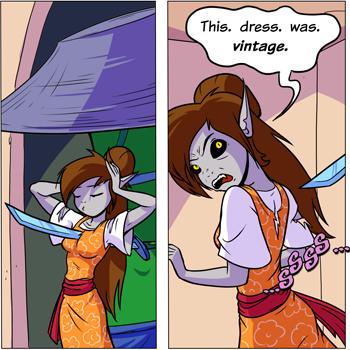 The Miz: A $5,000, custom-made suit, ruined! [points at a sprinkle] This ought to cover it! [grabs tip cup]
CM Punk: Woah, there. Hands off the tip jar.
The Miz: Really? Really? Well somebody's got to pay for my suit!
CM Punk: Well, in that case, I'm gonna get my money's worth. [grabs udder]
— WWE Slam City
Advertisement:

For many people, fashion is a big part of their lives. Sometimes it's a love for the aesthetics of clothing that attracts them, other times it's a desire for a status symbol to advertise one's wealth and influence to others. Or maybe they just hold some piece of clothing in a higher sentimental light than expected. Whatever the reason for their obsession is, those who love fashion are bound to spend a great deal of time working on their wardrobe. Thus, it's not surprising that people often get frustrated and upset when their clothes get stained, wet, or otherwise damaged while they're in public. All that work just to get humiliated!

When this situation plays out in fiction, however, characters tend to react as if they'd been violently wounded, going way past mere frustration and embarrassment. They'll scream, cry, throw fits, sometimes even mourn the "death" of the garment. In more lighthearted uses of this trope, this reaction will be entirely Played for Laughs, the writers will expect the audience to find the idea of freaking out over clothes silly. Other times, the audience will be expected to agree with the character that getting one's clothes messy in front of people is horrible and the ultimate form of humiliation, in which case this trope will either be Played for Drama or for Cringe Comedy. Essentially, this trope is when Minor Injury Overreaction is applied to clothes. If the universe itself uses this trope, it might get treated as a "What the Hell, Hero?" moment. Understandable if the clothing is actually quite expensive.

Because such characters are defined by their love of fashion, The Fashionista is a likely victim of this trope. Non-Fashionista characters can react this way as well, however. After all, just because a character isn't defined by their love of fashion doesn't mean they don't care about it at all. Female characters tend to get wardrobe wounds a lot and female-targeted works frequently use this trope because of the stereotype that Vanity Is Feminine. Because the stereotype often goes double for them, teenage/tweenage girls and works targeted at them tend to provide examples of this trope.

There are two forms of Wardrobe Wounds:

In this version, the character's outfit is ruined intentionally by another character as a form of non-violent "attack". Somebody wants to embarrass, humiliate, or show their contempt for someone else and they attempt to accomplish this via ruining the other person's clothes. This variant is usually done either by the Alpha Bitch to her victims or by the victims as a form of retaliation against the alpha bitch. Intentional Wardrobe Wounds often, though not always, double as examples of Contrived Clumsiness.

In this version, the character's outfit is ruined accidentally: the poor character is just in the wrong place at the wrong time. It may come up as a result of Giving Them the Strip if the surviving escapee complains about the garment's loss.

Either way, they will be devastated. A common way for the character to visually convey their "trauma" is to spread their arms out slightly to the side, open their mouth in shock, and slowly tilt their head downward as they "survey the damage".

Both forms are prime sources of Laser-Guided Karma and Humiliation Conga for antagonists and villains.

Also see My Favorite Shirt, a super-trope, and Hat Damage, a specific sub-trope. Compare Nobody Touches the Hair, when it's the hairdo damage that gets this reaction. The sister trope, Doomed New Clothes, may lead to a reaction about the loss of said new clothes, a.k.a this trope.