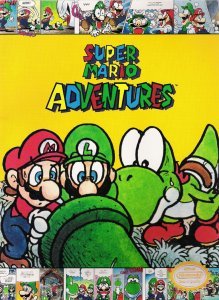 Super Mario Adventures is a serialized comic which ran in Nintendo Power magazine from January to December of 1992. The story (written by Kentaro Takekuma) features most of the enemies and characters of Super Mario World, but quickly spirals into an original, quite whimsical storyline. The comic itself was illustrated by Charlie Nozawa. Despite the involvement of Japanese talent, it was produced for a North American audience, and is not considered to be a manga.

It is notable for using plot elements that would later arise in future Mario games; for instance, traits such as Luigi's fear of ghosts, Bowser's amorous feelings towards the Princess (although The Great Mission to Save Princess Peach! did it first), and the Princess' role reversal with Mario (in which she storms Wendy O. Koopa's tower to rescue him).

When the comic originally ran, it ran alongside another animesque serial based on The Legend of Zelda: A Link to the Past. Both serials were later reprinted in Graphic Novel format to celebrate the magazine's fiftieth issue. The Super Mario Adventures trade paperback was also bundled with the first Mario vs. Wario comic that Nintendo Power had published back in 1993, which told the tale of Wario's backstory in a loose adaptation of Super Mario Land 2: Six Golden Coins. A second Mario vs. Wario comic was run in a later issue of Nintendo Power, but was not included in the graphic novel.