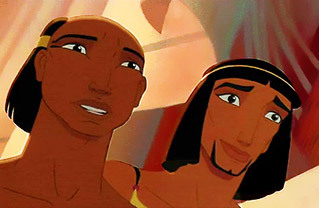 Guess which one is Egyptian.
In animation, certain facial features are used (and often exaggerated) to help the viewer identify ethnicity. Often this can depend on where (or when) the animation was produced.
Advertisement:

The audience is considered to be the "default" type of character; i.e., a character with no outstanding features is assumed to be of the ethnicity and/or gender of the (majority of) the audience. Any character which deviates from this is given some outstanding feature which identifies him or her as such. That's why a stick figure is usually assumed to be male unless it has long hair or a skirt, in which case it's female.

Similarly, that's why in the East, light skinned characters are assumed to be Asian, while in Western cultures they are assumed to be white. Again, people would largely make similar subconscious assumptions if they had to humanize a stick figure, smiley face, or animal unless they perceived specific racial or gender markers.

Naturally, with the prevalence of anime in the West, many people make the mistake of wondering why Japanese cartoons appear to feature white casts.

To the Japanese, they don't — even coupled with blonde hair and blue eyes on characters who are 100% Japanese. (But as these same characters often stand alongside naturally blue, pink and green haired people, yellowish hair might not be far of a stretch after all.)

Common animation features used to identify a character as female are Tertiary Sexual Characteristics. Ethnic identifiers might be more subtle (or not), and often are areas of great sensitivity. At its best it can be used for specificity in representation and diversity. Unfortunately, as seen even in this list, historically the more a character is distinguished from the presumed "beautiful default," the more likely they are to be exaggerated into outright racist caricatures and become ugly or alien. See also Phenotype Stereotype.

Related to Mistaken Ethnicity, especially for someone who doesn't conform to the stereotype.