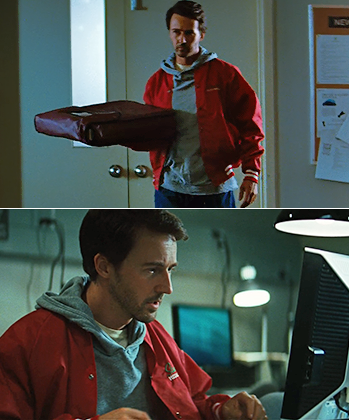 "Who ordered the large supreme, extra infiltration, no greens?"
"You can get anywhere with a pizza box."
— Everybody Hates Chris
Advertisement:

The default ruse for getting past guards, or convincing a subject to open their door, is to pose as a pizza (or other) delivery guy. As pizza is frequently ordered there is a high level of plausibility that someone does happen to be expecting one. As food is desired hot, guards are generally reluctant to delay drivers for an extended investigation.

Many pizza vendors don't have a uniform for their carriers, so there's no need to go to the effort of obtaining one. However, in some cases a real delivery boy will be Mugged for Disguise.

A savvy opponent will offer to take the box and give it to the recipient themselves, or ask to see inside the box. This requires the impostor to think fast, making up a lie about how they must collect a cash payment from the customer in person, or that the box can't be opened as it will cause the pizza to get cold. Of course, secure facilities IRL often have a rule where the delivery guy isn't allowed past the lobby, and the intended recipient must come to the lobby to collect their food in person.

A greedy subject will welcome the delivery knowing that it's not for them, believing that the restaurant has made a mistake and they are getting free pizza.

Compare Janitor Impersonation Infiltration, where the infiltrator pretends to be a new employee instead of a visitor, or Surprise Inspection Ruse, where the infiltrator poses as an inspector. Related to Bavarian Fire Drill, where the character impersonates a person in authority to get their way. Deadly Delivery is when this technique is used by a Professional Killer or other such criminal. Not necessarilt related to Pizza Boy Special Delivery.

If the subject is in a hotel room, see Room Disservice. Sister-trope to Bathroom Search Excuse.

In the United Kingdom, the equivalent was, for most of the 20th Century, the Milk Man. (It is a dead trope now). There used to be an old Army joke that a man wearing a peaked cap and a striped apron, carrying a crate of milk bottles or driving a float, can get into any base or government building past the sentries without any difficulty whatsoever. "Where's Tom"? "Off sick — I'm the new guy". "OK, come in". Examples include James Bond, The Prisoner, Doctor Who and a Carry On film.

While Buffalo Bill is in his basement, the FBI are seen surrounding a house before attempting to infiltrate using a delivery guy ruse. When Buffalo Bill hears someone knocking on the door and answers it, it's revealed to be Clarice. Meanwhile, Jack realizes the agents are at the wrong address and Clarice is alone with Bill.

While Buffalo Bill is in his basement, the FBI are seen surrounding a house before attempting to infiltrate using a delivery guy ruse. When Buffalo Bill hears someone knocking on the door and answers it, it's revealed to be Clarice. Meanwhile, Jack realizes the agents are at the wrong address and Clarice is alone with Bill.