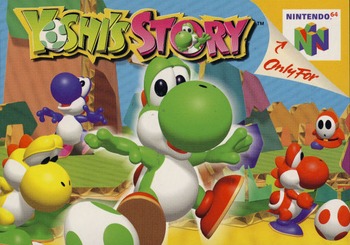 Released in 1997 on the Nintendo 64, Yoshi's Story is a Platform Game and a sequel to the Super Nintendo classic, Super Mario World 2: Yoshi's Island. It's shorter, simpler, and aimed at much younger players than its predecessor. The story concerns eight baby Yoshis that have been trapped in a magical storybook thanks to a spell cast by Baby Bowser, and must find and eat thirty pieces of fruit on each of the book's six pages in order to escape, steal back the Super Happy Tree (a tree that bears all kinds of fruit), defeat Baby Bowser, and rescue their parents.

Fruit is plentiful throughout each level, and novice players can simply gobble up every fruit they find to finish the game quickly. Experienced players can choose to eat only a single type of fruit (such as melons, the rarest type) for a higher score and a tougher challenge. You only need to beat one level per page to move on to the next, and bosses are fought on pages three and six. Finding up to three large, smiling hearts on any page lets you choose the more difficult levels on the next.

Although it's not as popular as its predecessor, Yoshi's Story is notable for introducing Yoshi's famous squeaky voice and anthropomorphic design (before then, he looked much more like a real dinosaur). A spiritual successor, Yoshi's Crafted World, was released for the Nintendo Switch in 2019.