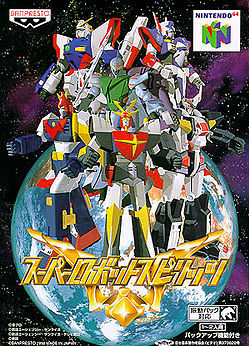 Super Robot Spirits (スーパーロボットスピリッツ Sūpā Robotto Supirittsu) is a 3D Fighting Game for the Nintendo 64 and a Spin-Off from the usual Super Robot Wars formula. It was released only in Japan in 1998. Like Shin Super Robot Wars, this game was largely forgotten because of its premise and obsucrity, but it served as the debut of the Judecca and its pilot Levi Tolar, who would reappear in Super Robot Wars Alpha.

Tropes regarding Super Robot Spirits include: