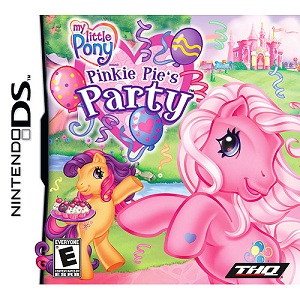 Too cute for you? Don't worry, it comes with a free syringe of insulin.
Advertisement:

Video Game Culture has two sides of stereotyped gaming by the media. One is the popular Ultra Super Death Gore Fest Chainsawer 3000 which is portrayed in media as a violent game that motivates a player to commit acts of violence in real life. The other is the extremely kiddy game rated E for Everyone (in North America),note There used to be an eC rating for "Early Childhood Rating", but it was retired due to lack of usage PEGI 3 (in Europe), or S CERO (in Asia). The game in question involves an overly sweet character in a Sugar Bowl setting and may or may not involve farming.

When this trope is seen within fiction, the game is often the alternative offered by the parent of the character when he proposes the latest violent game he wants for the holidays or his birthday. Needless to say, when given this one, it's seen as a yawn and our young man now seeks a chance to relish in laughable amounts of gore. Failure to do so will result in mockery. For something even more stereotypical, these games will be marketed towards girls, due to the perception that "girls don't play violent games." note  Studies show that women will play violent games as much as men, but they need more motivation behind the violence.

To some people, every game that does not have an M Rating falls under this category, and even some games WITH an M-Rating if the graphics aren't hyper-realistic. Many of the people who feel this way are too young to be playing a T-Rated game, let alone M.

Most Real Life games that would seem to meet this definition are better received than their fictional counterparts (filtering out Sturgeon's Law, of course), either because they're actually marketed toward small children (who don't care much about quality, as long as the game isn't actually unplayable), or because they're actually good. Plus, the Rule of Cute exists for a reason. However, just like Ultra Super Death Gore Fest Chainsawer 3000, they don't get named like this in Real Life; some examples include Animal Crossing, Cooking Mama and Diner Dash just to name a few.

Contrast with True Art Is Angsty. This page has a Word Salad Title.