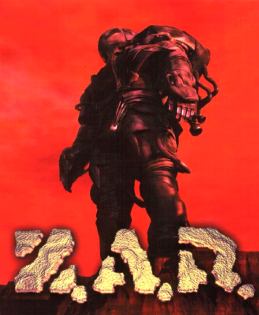 In the year 2097, the survival of humanity depends on imports of iberium, extracted on distant mineral-rich planets by automated mining systems. When one of these systems goes rogue and starts to fight against its human creators, only one bold man- with a power suit and an array of heavy weaponry- can take down the belligerent AI and restore the shipments of iberium to Earth.

ZAR (the title is an acronym for 'Zone of Artificial Resources') is a first-person shooter developed by russian studio Maddox Games and released for DOS in 1997. The player is tasked with visiting a series of alien planets, destroying a variety of hostile robot fighting vehicles and the infrastructure they protect. The game departs wildly from the conventional wisdom of shooters at the time: Each level is represented by an open, deformable heightmap that can be traversed infinitely in any direction; there are no human or even biological enemies (or allies) whatsoever; and the focus of gameplay is less on finding your way from the 'beginning' to the 'end' of a level and more on using a scarce supply of resources efficiently to clear out all the enemies that are present. Although the enemies themselves are fairly standard sprite graphics, the terrain and rendering systems give the game its own unique look, which can perhaps be best described as 'first-person Total Annihilation'.