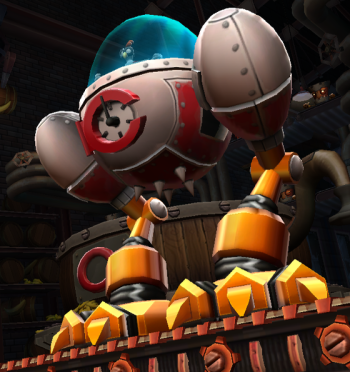 Chicken motifs are not a requirement.
"*GASP* It's got chicken legs!"
— GIR, Invader Zim
Advertisement:

Most tanks have tracks, some tanks have legs, while others have many, many legs. These tanks on the other hand, have chicken legs, or as they're officially known as "reverse-joint"note Erroneously, might we add. See below. or digitigrade

Most of the time a Chicken Walker is a Humongous Mecha or Mini-Mecha but occasionally backwards bending legs can be found on other objects, like buildings. While there may be some benefits to a leg shaped like this,note Again, see below. this design is usually chosen simply it because it looks less anthropomorphic than regular legs. This deliberate violation of one of the main tenets of character design — the one that states that machines must be humanlike to be relatable and aesthetically pleasing — is a quick way to signal to the audience that the robot in question is sits firmly on the Form Follows Function end of The Aesthetics of Technology. This is a particularly common design choice in military-themed Real Robot series.

Note, however, that chickens don't actually have "backwards knees", because the apparent "knee" is actually their ankle and heel joint (and their "ankle" a knuckle), while their actual knee is much closer to the body (and practically invisible under their coat of feathers). Same goes for horses, and most quadrupeds' hind legs.

That said, there is some credit for choosing this leg design for large walking machines. As stated in the Real Life examples section, the digitigrade leg structure has millions of years of theropod evolution to back its claim of being a highly effective bipedal leg design. And that's not even mentioning that human legs, which don't follow the digitigrade pattern, are riddled

Compare Bell-Bottom-Limbed Bots for another popular form of robotic legs.

For other awesome tanks check out Hover Tank, Drill Tank, and the Military Mashup Machine.