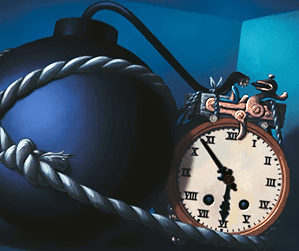 Hitting "Snooze" is not recommended.
Gordon: Where is he?
Joker: What's the time?
Gordon: What difference does that make?
Joker: Well, depending on the time, he may be in one spot, or several.
— The Dark Knight
Advertisement:

You have ten seconds to read this entry. Start reading.

This is one of the tropes popular in all forms of film and TV writing, as it adds a sense of urgency to the story — whatever the characters must do, they must do it within the time limit or the bomb will go off (the hostage will be killed, the poison will be released...).

The hero will succeed in their task only within a few seconds of the deadline — especially if there is an actual digital readout involved, counting down the seconds until Sudden Doom. If the hero is James Bond, the time remaining when the clock stops will always be 0:07. For other heroes, three seconds and one second seem common. (There's even the movie Canadian Bacon, where the clock's stopped at 0.7 seconds.)

Often there's the illusion of Real Time when we see the timer, but if you count the seconds and watch the clock, a 30-second countdown can often stretch as long as two minutes. Or it may ramp up and tick off far more time than has passed. (See Magic Countdown.)

In many cases, the bomb will not go off until one or two seconds after the timer reaches zero, even though the timer itself had tenths- or hundredths-of-a-second precision.

There are also rare instances where the bomb isn't defused: instead, it is made so that the explosion doesn't affect anyone (except maybe the bad guys). If this happens, there will be an Outrun the Fireball moment.

This trope is actually in contrast to real-life bombs which are camouflaged and seldom, if ever, include a visible timer. Most bombs these days even lack a timer entirely, and are remote detonated from a safe distance, but it is much less dramatic. Television bombs must include a countdown to add tension, and often include blinky blinking lights to let the audience, and the heroes, know that it is a bomb they are looking at, otherwise there would probably be a lot more dead TV heroes.

If you were looking for a situation where time itself explodes, see Time Crash.

Web Original
Western Animation
One... *earthshatteringka-* What the - you finished? How is that even possible!? ...Fine then. Go. Be on your merry way.
Feedback