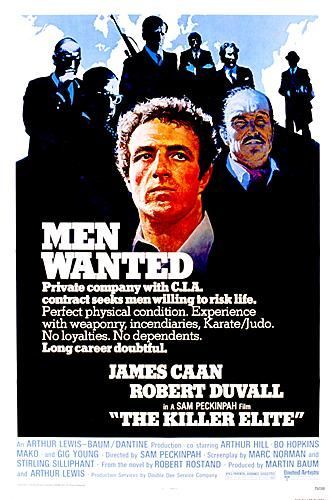 The Killer Elite is a 1975 American action film starring James Caan and Robert Duvall and directed by Sam Peckinpah.

Mike Locken (Caan) and George Hansen (Duvall) work for private intelligence agency ComTeg (Communications Integrity) handling deniable operations for the CIA, among other clients. The two are best friends, which doesn't stop Hansen from wounding Locken and murdering an Eastern European defector that they're guarding. After a lengthy and difficult rehabilitation, Locken is eager for revenge but his boss Cap Collis is not interested, assuming that Locken is useless for anything but a desk job. He's overruled by the CEO of ComTeg, Lawrence Weyburn, who hears that Hansen has been assigned to kill visiting Asian dissident Yuen Chung (played by Mako). Locken recruits two former colleagues, Jerome Miller (as rear gunner) and Mac (as wheelman). Cap however has his own agenda.

Not to be confused with the 2011 movie Killer Elite.