"Hey, you...think fast!"
Michael Carrington, at the beginning of each show. 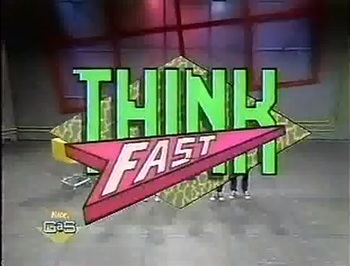 "They're here to play Think Fast- where fast finds and fast feet add up to fast prizes!"
Advertisement:

One of several Game Shows produced by Nickelodeon following the success of their original offering, Double Dare. Teams competed in head-to-head stunts (known as "events") to earn money and eventually the right to enter the Locker Room at the end of the show. The show was hosted by Michael Carrington in the first season, taped in Philadelphianote at the studios of the local PBS station WHYY-12, where Double Dare and the Eure era of Finders Keepers also taped, who was replaced by Skip Lackey when the show moved to Orlando and Universal Studios.

As the title suggests, unlike Double Dare and Finders Keepers, Think Fast had less to do with physical activities and more to do with brain teasers and other memory challenges, like dumping colored slime on your teammate in a certain pattern a la Simon.

Each show consisted of four events (worth $50 for the first two, $100 for the other two), after which the winning team would win money and a chance to solve the "Think Fast Brain Bender", usually a picture or a rebus covered by puzzle pieces. One would be uncovered after each event. Solving the Brain Bender was worth $200. The team with the most money won the game and advanced to the Locker Room.