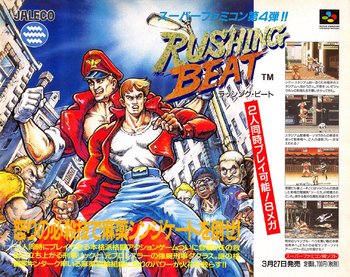 The flyer for the first game.
Advertisement:

Rushing Beat was a Beat 'em Up trilogy made by Jaleco. It was released for the Super NES in the early 1990s. One of the more memorable features of the game was an "Angry Mode", where you became invincible and did more damage. While the series itself has decent games, the overseas versions of the series suffered from questionable localizations.

The series consisted of:

Both Brawl Brothers and The Peace Keepers have been uploaded to the Nintendo Switch's online service, passing over Rival Turf entirely.