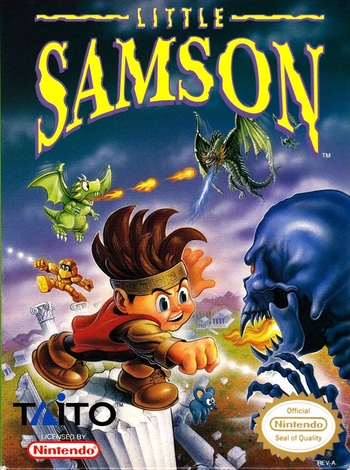 Little Samson (Seirei Densetsu Lickle, "Holy Bell Legend Lickle") is a Platform Game for the NES, published in 1992 by Taito. It was the only game from the obscure developer Takeru (also responsible for Cocoron) to be released outside Japan, albeit in very limited quantities.

When Ta-Keed, the Prince of Darkness breaks loose and wreaks havoc on the countryside, Emperor Hans summons the owners of the Majestic Bells of Power: A boy, a dragon, a golem and a mouse. These four heroes, Little Samson, Kikira, Gamm and K.O., assemble to fight Ta-Keed and his minions.