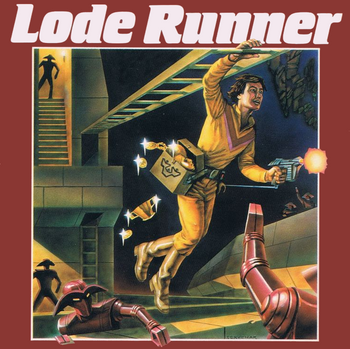 Lode Runner is a Puzzle Platformer created by American Douglas E. Smith in his dorm room. In it, the titular Lode Runner must collect every piece of gold before escaping a stage. Each level has a handful of enemy mooks trying to protect the gold by picking it up themselves and catching the Runner, but they can be trapped (and forced to drop what they're carrying) by pits instantly dug into the platforms using a special gun. These holes regenerate over time, which can defeat enemies (or the player character) if they don't manage to climb out.
Advertisement:

The original game, released in 1983 for the Apple ][ by Broderbund, consisted of 150 levels and was one of the first games to include a Level Editor. A myriad of ports and remakes have been released ever since by companies such as Sierra, Bandai, and Hudson Soft (mostly due to the NES version being a resounding success in Japan). A true sequel, the aptly named Lode Runner 2, was released in 1998 for Windows and Mac. In 1999, Lode Runner 3-D was released for the Nintendo 64.

Tropes in the Lode Runner series: