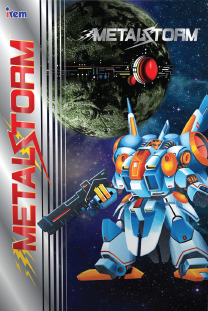 Metal Storm (重力装甲メタルストーム, Jūryoku Sōkō Metaru Sutōmu, "Gravity Armor Metal Storm") is a side-scrolling Platform Game for the Nintendo Entertainment System, developed by Irem. It was released in North America in February 1991 and later in Japan in April 1992.
Advertisement:

Battle Station Cyberg's massive computer that keeps peace throughout the solar system is no longer user friendly. It's gone wildly out of control. The laser gun it operates has already destroyed Neptune. Earth is its next target. As a high-tech hotshot, the player must enter Cyberg's core and activate the system's self-destruct mechanism. But time is running out... Oh yes, one more thing. The powers of the "Gravity Flip" Suit are essential for a successful outcome to this mission. The Suit empowers the player to proceed both upside down and rightside up as they dash to put this computer permanently "on the blink!"