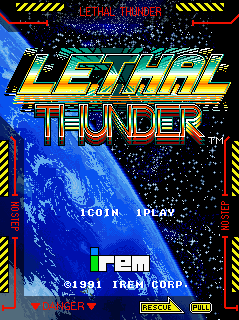 The game's main mechanic is that of Button Mashing: Your ship has an energy bar that constantly drains, and also affects the strength of its attacks. To fill it up, the player has to mash the shot button. The faster the player mashes the shot button, the faster it fills, and the stronger the player's shot becomes. Players take on an armada of alien invaders and thwart their attempts.