"Good Ending" redirects here. If you were looking for the manga series commonly known by that name, you'll find it under GE - Good Ending. 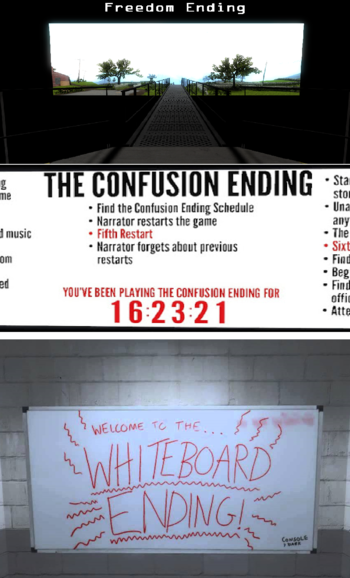 And there's lots more where these came from.
"That's how it could've happened... But how about this?"
— Clue, setting the stage for its alternate endings.
Advertisement:

Multiple Endings are the most commonly seen form of Story Branching in video games, used primarily to increase their Replay Value, especially visual novels, role playing games, Survival Horror, dating sims, and fighting games. Different strategies or levels of skill in play will result in different endings, rather than all leading to a single predetermined conclusion. Generally, multiple playthroughs are necessary to see all the content, and possibly to unravel certain mysteries. What determines the ending usually involves the path one takes through the game (which can be as simple as choices the game gives in the prompt or as complex as entire alternate levels), whether one completes the 100% Completion, how well one plays the game (generally, scoring high is good and using continues is bad), other characters' Relationship Values towards you (including the Alliance Meter), and/or how high the player got the Karma Meter. Sometimes there are dual-optimal endings depending on which side the player chose to be on. (These can include the Forces of Evil!) The most diverse examples are found in Visual Novels and Dating Sims, including but not limited to:

Some designers include truly "neutral" multiple ends, letting the player decide whether they're good or bad.

The major problem with Multiple Endings is that the sequel, should the developers decide to make one, obviously has to pick only one ending from which to continue the story — probably one of the good ones. This invariably occurs in adaptations to other media, such as novels, comics, and television. Video games have the technical means to solve said problem with an Old Save Bonus, wherein the previous game's conclusion becomes the player's personal canon in the sequel. The other problem is that thanks to YouTube uploads, being able to view multiple endings no longer requires you to replay an entire game (perhaps in response to this, many games now have in-game rewards for getting different endings). Sometimes multiple endings require the player to do different actions or align themselves to different sides in order to see each ending, even if it means going against the main character's nature and goals to achieve it. This can make the story and characters look disjointed and confuse the player when they see the main character suddenly switching sides because of a few actions they did in a previous scene. When done poorly, having multiple endings can cause the player to have more questions than feel like the story is really resolved.

Occasionally, the Multiple Endings are also couched with a non-linear plot — in which case, it can become frustrating-verging-on-impossible to find any of the multiple endings, especially if there are multiple "threads" in the plot.

Multiple Endings are an effective way to avert Unstable Equilibrium. Instead of rewarding highly-skilled players with more power, reward them with less power, but give them a better ending if they can succeed. The opposite of Multiple Game Openings.