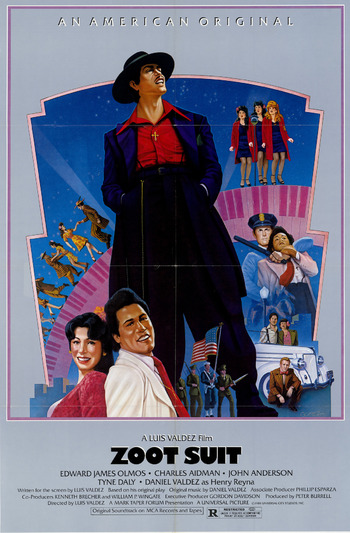 Zoot Suit is a 1981 musical drama film written and directed by Luis Valdez and adapted from his own 1979 play, which was in turn Based on a True Story account of the infamous 1942 Sleepy Lagoon murder

Henry Reyna (Daniel Valdez) is a young Chicano from the barrio, who has run with street gangs in the past but is straightening his life out. He has a girlfriend, Della (Rose Portillo), and has joined up to serve in the U.S. Navy in World War II—in fact, as the story opens, he's due to ship out the very next day. He and Della go out dancing along with Henry's friends and fellow members of the 38th Street gang. They have a hostile encounter at the dance club with a rival gang from Downey, but Henry's better instincts prevail and he and his friends leave without serious incident.

Henry takes Della out to the "Sleepy Lagoon" reservoir. Unfortunately, some guys from the Downey gang show up and give Henry a beating. Henry gathers the 38th Street boys together and they return to Sleepy Lagoon looking for payback. Tragedy ensues, and soon Henry and his friends find themselves on trial for murder, trapped in the clutches of a viciously racist California justice system.

A singing, dancing Edward James Olmos stars as "El Pachuco" ("the gangster"), a sort of Greek chorus who is also Henry's inner voice; none of the other characters can see him. Tyne Daly appears as Alice Bloomfield, a union activist who organizes a defense group for the 38th Street boys. Kurtwood Smith has a small part as Sgt. Smith; Robert Beltran made his film debut as Lowrider.

Luis Valdez adapted his own hit play; several of the actors, including Daniel Valdez and Olmos (but not Daly) were reprising their roles from the stage production. The movie is essentially a filmed theater performance, shot entirely on a theatrical stage, with relatively few cinematic touches aside from some Stop Tricks and quicker cutting than would be possible on stage.