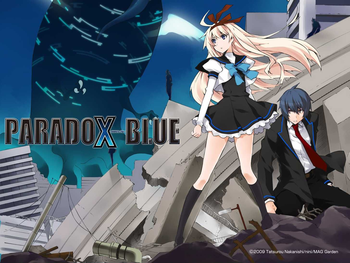 "Where do you think the boundary between games and reality is?"
Advertisement:

Paradox Blue is a 5-volume manga collaboration between Nakanishi Tatsurou and nini. Angels have descended onto earth in order to test humanity through the angels' paradox: questions that couldn't be easily solved. Answer correctly and be rewarded; fail, and be punished.

The first time humanity failed to overcome the angels' paradox, an entire city in England was eradicated in the span of one night. There was only one survivor.

The manga follows a team of five heroes as they encounter the Angels and clear the trials posed to them. The manga presents itself as a game and optionally reads like a Gamebook (down to bad ends) with clues to the answer marked by white feathers surrounding the important panels.

Because the scanlations are only up to volume two, spoilers follow so read at your own discretion.