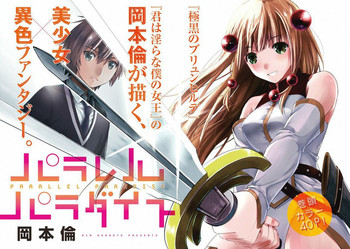 "I don't know who brought me here or why...but I will definitely defeat the Jealous God who brought so much suffering to both me and this world."
Advertisement:

One day at school, Yota sees someone strange entering school. Out of nowhere this being appears next to him and makes him fall from the 3rd floor! But he stops in a strange world, where beings like dragons exist! Yota meets a young paladin, and discovers that he is the only man inhabiting that planet, and that its inhabitants are extremely "weak" to his presence... would this be a paradise?

Parallel Paradise is an ongoing manga by Lynn Okamoto that began serialization in Kodansha's Weekly Young Magazine in 2017. Like his previous works, it's quite open about nudity, and takes it another step forward and has actual sex. It's licensed in English by Seven Seas Entertainment as part of their Ghost Ship imprint.