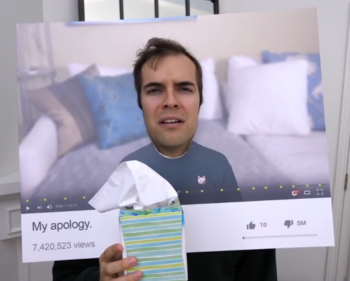 I'm sorry for putting lots of ads in my last apology video.
"I know everyone is angry about that video where I made a homeless man twerk while I rained dollar bills on him, but in my defense, I suffer from... eosinophilic esophagitis...?"
— Terrible Writing Advice, "Apology Video Template"
Advertisement:

[Big Sigh] ...So, fellow Tropers, you might have heard some rumors about me. Perhaps they've said that I did something absurdly offensive, or I posted something incredibly racist on social media. I may have even committed a horrendous crime that I really should be in custody for. Since the backlash is getting too large and people won't know I'm sincere if I apologize with just a text post, I'll make an apology video and post it on YouTube (or some other video-sharing site). Of course I'll start my video with a long sigh, and then I'll get very emotional and use lots of Jump Cuts as I try to apologize...

These kinds of videos are rife for parody, but they're still considered necessary to repair one's image whenever a vlogger gets into trouble. This trope covers parodies of apologies made by video creators, though the trend of YouTubers giving emotional apologies in the late 2010s (and the ensuing parodies) is the Trope Codifier. They're the favorite tool of the Bad Influencer. Parodies often start with a Clickbait Gag and exaggerate the offensiveness of the transgression being apologized for. The apology parody could use the words of spoofed creator, but make them full of sarcasm and actually unapologetic, blaming it on everybody but themself.

open/close all folders
Live-Action TV
Music
Web Animation
Advertisement:
Web Comics
Web Original
Web Videos
Western Animation
... So, in conclusion, the reason I posted that stuff was because of trauma from my bad esophagus. I'm sorry if you were offended.
Feedback