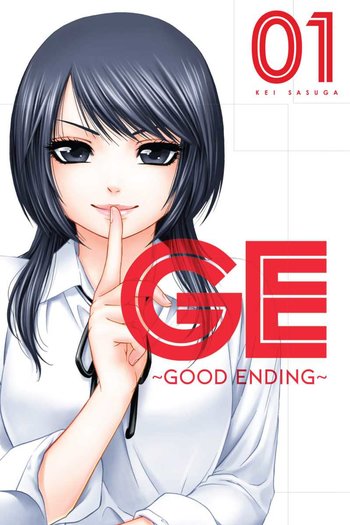 GE - Good Ending (GE~グッドエンディング~) (no, not the trope) begins with high school student Utsumi spying on the captain of the tennis club, Iketani Shou. Fortunately, Utsumi is noticed by Yuki Kurokawa, who confronts him about it and decides to help get him together with Shou. From there, the story takes off with Yuki teaching Utsumi the ins and out of girls, going on dates, and love.

GE - Good Ending is a shonen manga by Sasuga Kei, which ran in Weekly Shōnen Magazine from August 2009 to January 2013 for a total of 156 chapters.

As of April 2021, all 16 volumes are published in English digitally by Kodansha for the US market.

Yuki: Tohru, all you do is give me demands... the person I want beside is always concerned about me. Even if I gave in and said 'yes' to your request, my heart would not be in it. You've even ignored my feelings and locked me in here... just what did you hope would happen?