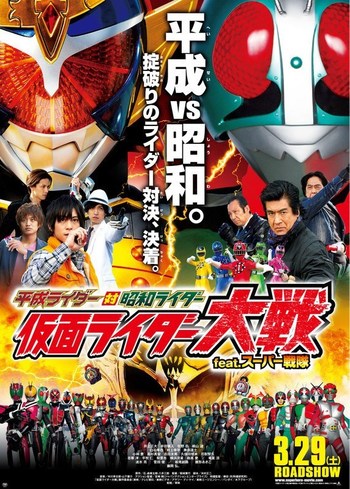 Some time after meeting the Toqgers and fending off the Badan empire, Kouta hears rumors of a strange new world being discovered underground. Deciding to investigate with Mai, they indeed travel to this new world and meet Shuu, a boy with the mysterious power to reverse objects. He wants to do... SOMETHING but doesn't know what, so Kouta and Mai help him out.

However, they are interrupted by Takeshi Hongo aka Kamen Rider Ichigou who demands Kouta hands the boy over and refuses to acknowledge Kouta as a Kamen Rider. Kouta doesn't buy any of it, but the discussion is interrupted when goons attack. Ichigou deals with them and lets Kouta go.

It's here that, when they return to Drupers they find none other than Tsukasa Kadoya aka Kamen Rider Decade, who tells them that the Badan empire hasn't been thwarted at all. He's trying to gather the 15 Heisei Riders together to stand against them, but the Showa Riders are making things difficult by trying to kill them, not to mention that the Riders themselves all have their own problems...

A movie celebrating the fact that both Showa and Heisei series have 15 members now, the show is a commemoration of all things Kamen Rider, and a long-awaited showdown between the two eras.