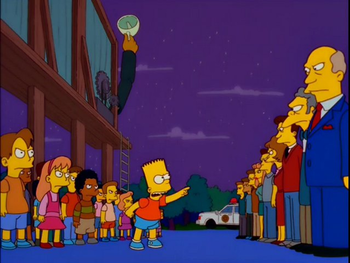 In the aftermath, it was learned that Superintendent Chalmers drew first blood.
Advertisement:

When the "generation gap" turns into rivalry or all-out war between children and adults.

Often goes hand-in-hand with Adults Are Useless. A war between kids and adults will, of course, almost always include Child Soldiers and/or Abusive Offspring on the side of the children, and Abusive Parents on the side of the adults. May contain one or more children (intentionally or not) becoming Self-Made Orphans or one or more parents (intentionally or not) Offing the Offspring. However, may also be a Velvet Revolution or a Friendly Rivalry.

If the children win, this may lead to a Teenage Wasteland. If the adults win, may invoke a Childless Dystopia.

Closely related to Intergenerational Rivalry. Contrast Intergenerational Friendship (A friendship between two people from different generations) and Precocious Crush (when a child falls in love with an adult). However, these relationships may still leave room for conflict.