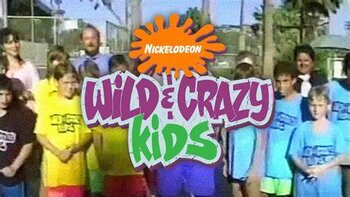 Welcome to Wild and Crazy Kids!
The show that goes anywhere and does anything to find kids having fun!
With your hosts, Annette Chavez/Jessica Gaynes, Omar Gooding, and Donnie Jeffcoat!
—Opening Narration for The '90s version

Dubbed as "the show that goes anywhere and does anything to find kids having fun", this Nickelodeon Game Show (term used loosely) from The '90s featured teams of kids playing games ranging from summer camp-style contests to different takes on sports; several episodes also took place at amusement parks or water parks. The games were played strictly for fun with whatever kids they could round up for the day, including locals, members of boys' and girls' clubs, and sometimes even the cast and/or crew's own family members; no prizes were awarded, hence no apparent need for "eligibility requirements". The show was created and executive produced by Woody Fraser, who would later go on to create and executive produce another series for Nickelodeon, What Would You Do? (Nickelodeon). The show was produced by Woody Fraser Productions and Nickelodeon alongside Reeves Entertainment Group, a production company owned at the time by Thames Television.

Revived in 2002 for a brief period, with episode names all containing "WACK". This time, Valencia Entertainment International replaced Reeves Entertainment Group as a production partner, as Thames Television had gone bankrupt in 1992 and was bought out by Fremantle Media.