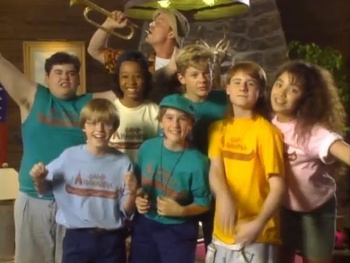 Ug: Camp Anawanna...
Z.Z.: We hold you in our heart...
Donkeylips: And when we think about you-
Budnick: It makes me wanna fart!
[other kids laugh]
Ug: It's "I hope we never part"! Now get it right or pay the price!
— excerpt from the Season 1 opening theme. The Season 2 theme would have Budnick sing "I hope we wanna fart!" instead.
Advertisement:

A 1991–92 Nickelodeon sitcom centered around a group of kids at summer camp Anawanna, Salute Your Shorts was a network contemporary of such shows as Clarissa Explains It All, The Adventures of Pete & Pete, and Are You Afraid of the Dark?, and like those three tends to be among the more clearly and fondly remembered pieces of the era. The fact that the show's No Budget, real-kids look and feel overlap so well between the Canadian productions that characterize '80s Nick and the Orlando-shot '90s Nick shows helps (Shorts itself was made in Los Angeles.)

The title of the show comes from a common prank in initiating new campers. Older, jerkier campers would loot their luggage, steal their underpants, and run them up the nearest flag pole to let them flap in the breeze. Seeing how there's no way to un-steal it, the appropriate response is to "stand at attention, click your heels, and salute your shorts!"

The first episode introduced Michael Stein (Erik MacArthur), the Naïve Newcomer, to the existing ensemble cast. The other campers included:

The only authority figure in sight is Kevin "Ug" Lee (Kirk Baily), the dim-witted loser guy counselor. Dr. Kahn, his superior, is only heard through loudspeaker (voiced by creator and executive producer Steve Slavkinnote  Not, contrary to popular myth, by Ben Stein.).

In season two, Erik MacArthur left the show; accordingly, Michael left camp (ostensibly due to chicken pox), and was promptly replaced by Ronnie Pinsky (Blake Sopernote  AKA Blake Sennett). Pinsky, in his debut episode, is established as a wise-cracking Ferris Bueller-like character (Michael's polar opposite, really) and immediately becomes the most popular kid in camp (except with Budnick). Later in the season, however, he becomes much more restrained and fallible (though still with his moments of Bueller-like mischief), and his popularity is significantly lower.

Given the timing of the 25-year nostalgia cycle, the series was never on DVD. As of November 2018, it's available for download or streaming on iTunes and Amazon Prime.