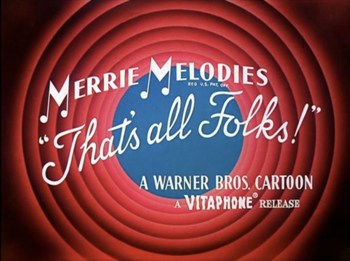 An element that appears at the conclusion of every episode, chapter, or Story Arc. It can be dialogue, narration, or Paratext. Either way, it informs the audience that the episode/arc is over, without resorting to a generic "The End" or "To Be Continued..." title card.

For some viewers, On the Next ______ and Closing Credits tend to function like this (even though that's probably not the intent of the creators). Oh, Cisco! is the variation that ends every ep with a joke, which may lead to everybody laughing. May include a catchphrase.

A Sub-Trope to Once per Episode and Super-Trope to So Once Again, the Day Is Saved. Shows, especially aimed at young children, often end with a Wrap-Up Song. See also Signing-Off Catchphrase.