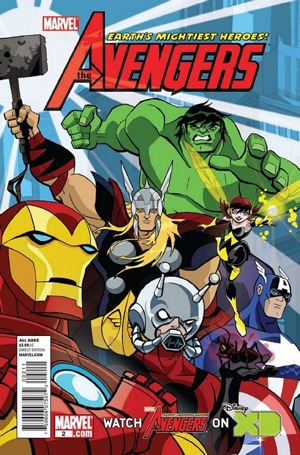 Clockwise from lower left: Iron Man, The Mighty Thor, The Incredible Hulk, The Wasp, Captain America, Ant-Man. Not pictured: Black Panther and Hawkeye.
"You can fight it all you want, but we are going to be friends, all of us! It's inevitable! We've saved the world like a hundred times now, we've been through horrible things, we've saved each other's lives! We are in this together, and it's time you all started acting like it!"
— The Wasp
Advertisement:

After The Avengers: Earth's Mightiest Heroes! premiered on Disney XD, Marvel Comics released a four-issue collection of tie-in comics (January- April, 2011) set in the show's universe. The first three each contained two comics, plus some character biographies. The first comic in each of these books is basically a standard story of The Avengers fighting a threat that one hero cannot fend alone. The second comic in each of these books features a short story in which two select heroes team up against an evacuee of the breakout. The fourth issue deviated from this format, through presenting one relatively long comic.

Additional comics started coming in 2012, under the "all-ages" Marvel Universe banner. The first 12 issues in this series each contain two all-new comics. Issues 13-18 present Film Comics of the first six episodes of the cartoon's second season. (For tropes related to the Film Comics, visit the trope pages of the show and the season 2 episode recaps.)