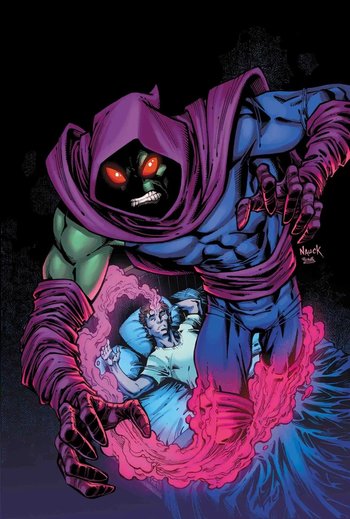 Created by Bob Budiansky, known for his contributions to the Transformers and his penciling work on Ghost Rider, Sleepwalker was one of several new superheroes given their own series by Marvel Comics in the early 1990s, also known as The Dark Age of Comic Books in many circles, an era particularly known for the '90s Anti-Hero. Unlike most of the other characters from that era, Sleepwalker was not particularly violent or bloody, being more inclined towards traditional superheroics in the vein of Spider-Man, Daredevil and other traditional superheroes. Starting in 1991, the series lasted three years, thirty-three issues (June, 1991-February, 1994) and one Holiday Special before it was canceled.

The Mindscape is an alien dimension that is connected to the minds of all living entities in our dimension. It is infested with horrible demons and monsters, many of which seek to prey on the minds of innocent humans. The Sleepwalkers are a race of beings charged with defending the minds of humanity, fighting the demons of the Mindscape and capturing them before they can do any harm. One of these Sleepwalkers became trapped in the mind of human college student Rick Sheridan by his enemy, the demonic Cobweb. The Sleepwalker's attempts to escape wound up getting him fused with Rick's consciousness, producing a bizarre side effect that allowed the Sleepwalker to manifest in the human world whenever Rick was asleep. Simply calling himself by his race's name due to his actual personal name being impossible for humans to pronounce, Sleepwalker took to battling crime in New York City while Rick slept, fighting criminals and supervillains the way he had the monsters of the Mindscape. This was not always easy, particularly since many people were horrified by Sleepwalker's appearance, Rick's life took a downward spiral as he struggled to cope with Sleepwalker's presence in his life, and Sleepwalker himself was plagued with survivor's guilt and loneliness.

The series put a unique spin on many of Marvel's traditional concepts, such as the hero being hated and feared by the very people he tries to protect, and the main protagonist suffering the consequences of trying to juggle his heroic and ordinary lives. While Rick was not in actual danger when Sleepwalker emerged from his mind to fight crime, he did suffer severe repercussions, including losing his job as a building superintendent and nearly being killed when Sleepwalker's addiction to a particular frequency of light led the alien to force his way out of Rick's mind, putting him in a coma.

While Sleepwalker has remained a C-list backgrounder since the series was cancelled in 1994, he nonetheless has a small cult following, including The Walking Dead creator Robert Kirkman. Quite unexpectedly, Sleepwalker made a big return in 2018's massive Infinity Wars event, featuring into the main story as well as in his own dedicated tie-in series.