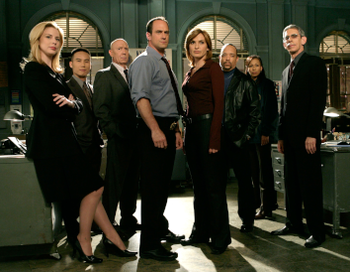 This is a visual trope: a shot of the main cast of a work whole posed as for a group photograph or portrait, usually against an abstract or "typical" background. Often the shot is "assembled" by sliding or fading individuals or small groups into their places in the composition. While leads will often be in the center where the eye is drawn first, as in the V-Formation Team Shot, unlike it they will be standing close to their best friend/love interest, and the group as a whole is in a rough line, not a V. This is a common way for the opening credits of a work to end.

Team shots are usually restricted to the protagonists of a show, although sometimes the antagonists may appear, either as a small, slightly separate group or as an image above and/or behind the heroes.