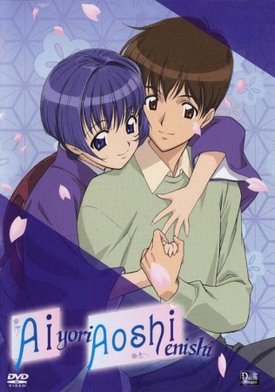 Aoi Sakuraba and Kaoru Hanabishi. Also pictured: true love.
"Indigo-dyed kimono are very dark at first. But if you keep wearing them, as the time passes, the color blends, and the indigo becomes more blue and vivid. Aoi wants to cultivate our love over time, too. Just like this kimono, it will continue to grow more intense, from now on into forever."
—Aoi Sakuraba
Advertisement:

Kaoru Hanabishi, an ordinary college student, runs into a beautiful young woman dressed in an old-fashioned kimono, lost and flustered in the complicated Tokyo subway system. After taking great pains to escort the woman to her destination, he discovers that she is really his childhood friend, Aoi Sakuraba, whom he had promised to marry almost two decades earlier...

Except that the engagement was annulled by the Sakuraba clan when Kaoru left the Hanabishi clan, after years of abuse from his grandfather. Aoi — who had loved him since childhood and dreamed of marrying him — is unable to accept the annulment and tracks down Kaoru to find out why he doesn’t want to marry her. After they meet up again as adults, and he properly falls in love with her, they decide to reaffirm the engagement but are forced into an unusual situation: in order not to shame the Sakuraba family, they must keep their relationship a secret even as they move into a Sakuraba mansion with the help of Aoi's guardian, Miyabi Kagurazaki.

Sure enough, almost immediately a group of college girls move into the mansion, one by one -- and those who aren't already in love with Kaoru all quickly fall for him. Hilarity Ensues, as Kaoru and Aoi (who pose as a tenant and landlady, respectively) try to keep their relationship a secret.

Ai Yori Aoshi ("Bluer than Indigo") began as a manga by Kou Fumizuki, which was serialized in Young Animal from 1998 to 2005. It received an anime adaptation in 2002 and a second season, Aoi Yori Aoshi: Enishi, in 2003. A Visual Novel with an original story taking place in the anime's continuity was released for PlayStation 2 in Japan in 2003, and a special English-language version was released for PC in North America by Hirameki International Group Inc..