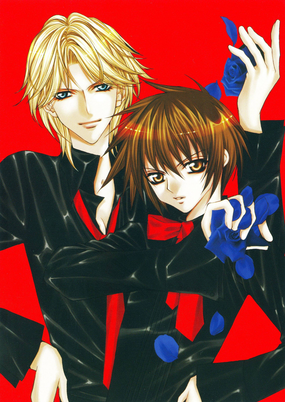 Akira Shiraishi, a feminine-looking boy, is the "princess" of his all-boys school. Mizuki Sakurazaka, an androgynous-looking girl, is the "prince" at her all-girls school. When Akira joins Mizuki's all-girls band, a series of events causes them to come together, despite prejudice due to their looks and their peers' reactions.

Ai Ore! Love Me! (Ai o Utau Yori Ore ni Oborero!, or "Drown Me Then Sing Of Love") is a shoujo manga by Mayu Shinjo. It originally ran in Shoujo Comic from 2006 to 2009. A sequel series called Ai-Ore! Danshikō no Hime to Joshikō no Ōji ran in Monthly Asuka from 2008 to 2010. Both manga are licensed in English by Viz Media.