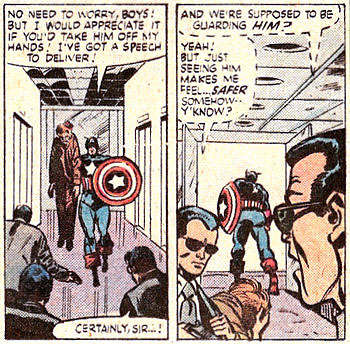 This tends to happen when your President is Captain America.
Underofficer Kanishka: How are we supposed to be an imperial bodyguard if the damned Empress herself...
Commander Kungas: You could always go back to work for Venandakatra. He never took any personal risks.
— Belisarius Series

If you're important, then it's best to stay safe; all sorts of people might bear a grudge toward you for your decisions, because of who you are, because they want your job, or simply because you're important. This goes double in fiction, where there wouldn't be a plot if someone wasn't after your head. Thus anyone who's anyone needs a bodyguard to watch their back. The problem is, anyone who's anyone in fiction is also able to back it up.

This trope concerns bodyguards who are a lot weaker than their charges. Naturally, while there's often no explanation, it can be justified:

Keep in mind that they must be specifically guarding or protecting their employer or have it designated as their main role; simply being a mook in their employ doesn't count (and indeed them being weaker than their boss is to be expected). Often they are used in fiction as a foreshadowing of just how badass the person they are guarding is and are frequently dangerous enough that they give the heroes a difficult fight, in some cases being on the same tier as the person they are guarding. Even in cases where they are Elite Mooks thrown to be Cannon Fodder, they can be used to effectiveness to portray a Badass Crew who can easily kill the hero's weaker companions, if not outright be shown as a Badass Army.

Compare and contrast: Hypercompetent Sidekick (a reversal), Dragon-in-Chief (who is often more powerful than the Big Bad) and Bash Brothers (for when both bodyguard and client are equal in power), Violently Protective Girlfriend. This can quite easily happen with a Hero Secret Service if The Hero being guarded is powerful. Often the result of Authority Equals Asskicking.