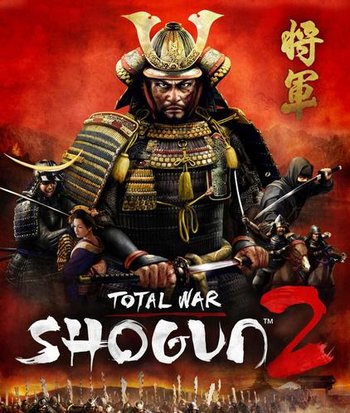 "To be prepared for war is one of the most effectual means of preserving peace."
"Turning the snow pink; in the absence of springtime; I create blossoms."
Advertisement:

Total War: Shogun 2 is the seventh full installment in the popular Total War series of strategy games. Like its predecessors, it features a mixture of turn-based strategy on a campaign map and real-time tactical battles. As a sequel/remake of the very first game of the series, Shogun: Total War, the setting returns to Feudal Japan and the Sengoku Period of civil war. Starting in the 1540s, the player takes control of one of the powerful clans struggling for superiority in Japan, with the eventual goal of uniting Japan under a new shogunate.

Two expansion packs were produced, introducing new campaigns to the game. The first, Rise of the Samurai, is set during the Genpei War of the late 12th century, which led to the decline of the Chinese-influenced Imperial Court, the rise of the first shogunate and the dominance of the Samurai class in Japanese society. Unlike the basic game, the major clans are split among three families and the igniting event of the conflict will occur (Emperor Takakura is pressured to abdicate by the Taira and his toddler grandson Antoku is placed on the throne), setting off war between the three families and probably their aligned minor clans with them - the pressures of this war will create an emphasis on the usage of agents to aid your cause without even more fighting. The religion mechanic has been adapted to "influence" of the three major families which will be a core mechanic to deal with constantly, since Junsatsushi agents can convert provinces with a majority of influence aligned to your family without a fight - especially helpful with the war certainly occupying your troops elsewhere.

The second new campaign came in the form of a stand-alone expansion, Fall of the Samurai, which depicts the Boshin War of the 1860s between the Tokugawa Shogunate of Edo and the resurgent Imperial Court in Kyoto. As a result of Japan's opening and contact with Western influences, Japanese society is changing rapidly, spelling the demise of the feudal rule under the Samurai which has been in place for almost 700 years. "Modernization" serves as the technology trees and buildings involved in the main strategic mechanics, which will naturally improve your clan greatly to procure...at the cost of citizens becoming increasingly unhappy with their lives being turned upside down by foreign influence overtaking traditions. The influence mechanic replacing religion remains from Rise of the Samurai, instead split between Imperial and Shogunate alignment. Unlike the other campaigns, Realm Divide here will have the Shogunate and Imperial forces openly declare their loyalties and fight against each other with you forming the vanguard of one of them - or you may instead choose to fight off everyone again by forming an independent republic!