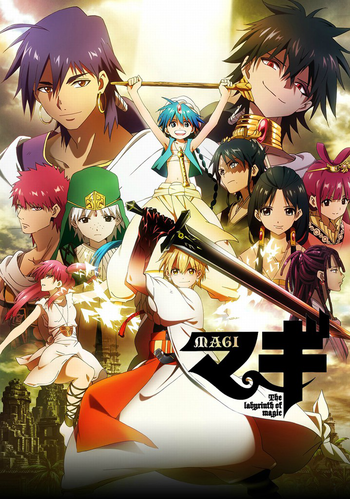 "My king... O great magician... I will grant your wish... Whether it be vast wealth, rule over millions of stars, or eternal life. Tell me then... What is your wish?"
— Opening Lines
Advertisement:

An Arabian Nights-themed manga by Shinobu Ohtaka, the author of Sumomo Mo Momo Mo. The manga ran in Weekly Shonen Sunday from 2009 to 2017, for a total of 369 chapters.

Aladdin is a traveler in a new world. He has a magic flute that summons a huge, muscular Djinn named Ugo. Ugo tosses aside any threats to Aladdin and whomever Aladdin is trying to protect. In Aladdin’s travels, he meets a young man named Alibaba Saluja, who dreams of getting filthy rich by dungeon diving. In the world of Magi, dungeons periodically appear out of nowhere; mysterious, seemingly extra-dimensional spaces, full of monsters, traps, and fabulous treasures. Alibaba sees Ugo in action, and realizing that Ugo would mitigate a lot of the dangers. Alibaba quickly decides to befriend Aladdin and persuades him to go dungeon diving and capture the dungeon together. Aladdin tells Alibaba that he wants to learn about himself, the world, metal vessels, djinns, and much more. Alibaba promises Aladdin that they would go on an adventure after capturing the dungeon. Thus, the journey of Aladdin and Alibaba begins!

As they charge into unknown peril, encountering allies and powerful foes, Aladdin and Alibaba learn from their encounters from other djinn and people.

An anime adaptation by A-1 Pictures written by Hiroyuki Yoshino, with music by Shiro Sagisu and directed by Koji Masunari aired as a part of the Fall 2012 Anime, with a second season airing in Fall 2013. American viewers may watch this at Crunchyroll.

. A spin off series based around Sinbad written by Ohtaka and drawn by Yoshifumi Ohtera, titled Magi: Adventure of Sinbad, was published from 2013-2018 on the Shogakukan ONE manga app and had its own anime adaptation aired in Spring 2016. Both series stream worldwide on Netflix.

Magi: The Kingdom of Magic

Magi: The Kingdom of Magic