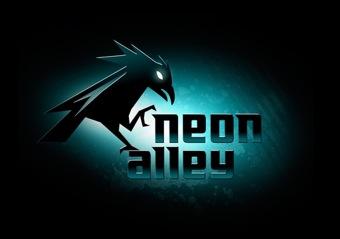 for Neon Alley before showcasing its various titles.
Advertisement:

Neon Alley was a digital streaming service run by VIZ Media. Launched in 2012, it was initially a 24/7 linear streaming channel available for the PlayStation 3, and eventually the Xbox 360 and PCs, for a monthly subscription fee.

Neon Alley specialized in English dub premieres (such as Fate/Zero, InuYasha: The Final Act and Tiger & Bunny), as well as English-dubbed anime in general, and both animated and live-action movies. It also signed an agreement with the CHIKARA pro wrestling promotion to produce a weekly program on Saturdaysnote The deal expired in March 2014. Chikara's emphasis on fantastic comic book-like storylines and a defined seasonal format made the arrangement not as far of a stretch as one might think.

In 2014, Neon Alley became exclusive to Hulu in the United States (and later became part of Hulu's no-commercials subscription plan). The linear channel was closed down and Neon Alley transitioned to become a Hulu-supported streaming site, with the addition of subtitled anime, simulcasts, and other content previously streamed at VizAnime.com. Since Hulu was not available in Canada, and Viz Media has not published any kind of plan for re-launching north, rumors have circulated that this was a retreat and the service would remain exclusive to the U.S. note In 2016, Tubi TV began streaming several Viz titles to Canadian viewers.

As of April 4, 2016, with the relaunch of Viz.com, Viz Media retired the "Neon Alley" branding altogethernote Neon Alley's blog and social media accounts haven't been updated since 2015. Furthermore, in press releases published since November of 2015, Viz Media no longer referred to their "consolidated online destination" by name. Finally, Neon Alley's Hulu page has been replaced by a Viz Media-branded page., though they continue to stream titles on Hulu

Neon Alley has streamed the following...