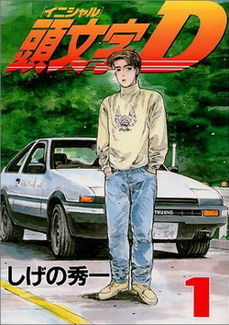 "A car driven by a street racer who is at the level where he can maneuver it as easily as his hands and feet has an aura about it. Ryosuke Takahashi's driving has a strong aura. His brother Keisuke's aura is still weak. But that Eight-Six was emitting a strong aura. If he represents Akina, then the winner is still up in the air."
— Takeshi Nakazato
Advertisement:

Takumi Fujiwara is an average eighteen-year-old in Gunma Prefecture with an average part-time job as a gas station attendant and a not-so-average hand in his family's tofu business. Ever since he was thirteen — five years before he was even qualified for a driver's license — he has been helping out his father Bunta by delivering tofu on the latter's Toyota Sprinter Trueno (AE86) to a hotel at the summit of Mt. Akina every morning at 4:00 AM, but with a challenge: he must negotiate the slopes and curves without spilling a drop of water from a cup placed on the dashboard. Otherwise, the tofu would be ruined.

Naturally, his secretly-instilled skills didn't go unnoticed by the Japanese street racing underground. When the local racing team, the Speed Stars, get a challenge from the infamous RedSuns led by Takahashi brothers Keisuke and Ryosuke — the former whom Takumi met the night before — the team had to take him in as replacement for their currently-injured main driver.

Before he knows it, Takumi is quickly, and unwillingly, plunged into a high-speed world of white-knuckle contests on the most dangerous mountain passes (touge) in Japan. Assisted by the Speed Stars, his slightly obnoxious friend Itsuki Takeuchi, his good-hearted yet somewhat shady girlfriend Natsuki Mogi, and the sage-like words of Bunta, himself a retired ace drifter, Takumi will need all the help he can get to outwit and outmaneuver the most talented underground drifters in Gunma and the Kantō region as a whole, making his way to the top of the heap.

Initial D is a long-running manga series (1995-2013) created by Shuichi Shigeno, with a series of Animated Adaptations called "Stages." The focus is on the Japanese drift-racing underground, and as such, has acted as an anime Gateway Series for western car enthusiasts, and vice-versa. The anime is also famous for its blatant use of CG during its racing scenes, making for a fountain of references in several other anime.

In North America, both the manga and anime were originally licensed by Tokyopop, whose alterations of the source material became controversial among the fans. When Tokypop USA imploded in 2011, Funimation picked up the rights to the anime; they carry the first four Stages, as well as the first Extra Stage OVA set. They also created a more accurate English dub, just as they had with One Piece. You can stream those episodes on their website, dubbed or subbed, for free here

- if you happen to live in the United States or Canada.

A live-action movie based on Initial D was released in 2005. There are also numerous video game adaptations of the material, notably the Initial D Arcade Stage series, which brought the competitive arcade racing scene to life.

In 2017, Shuichi Shigeno began working on a new racing manga called MF Ghost, the first chapter of which being released on September 4th, 2017. Set in the same universe, it is a Sequel to Initial D, with Ryosuke Takahashi being the founder of the MFG League and describing it as the next step in Project D, while Takumi is the main character's teacher.

Compare and contrast with Wangan Midnight and REDLINE. See also The Fast and the Furious: Tokyo Drift which glenned some inspiration from this series (ironiclly the movie came out the following year after the live action film did). Not to be confused with the Will of D.

Tropes pertaining to the Initial D anime/manga with multiple examples include:

While about to lose the race against Takumi, Shingo attempts to ram the latter off the road only for him to miss and ultimately wrecking his own Honda EG6.

Example of:
Hoist by His Own Petard

While about to lose the race against Takumi, Shingo attempts to ram the latter off the road only for him to miss and ultimately wrecking his own Honda EG6.