We Win... Because You Didn't 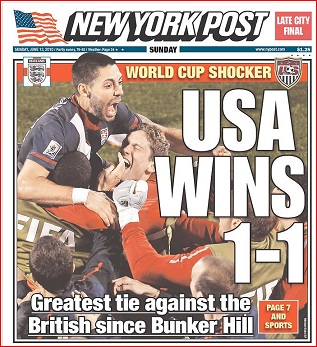 It's the American way!
"There are some fights you just can't win. A force can be so overwhelming that no tactical approach in a fight is going to lead to a victory worth having. When you can't win in a fight, sometimes you have to settle for making sure that if you lose, everyone loses. It works for nuclear weapons; it works for me."
— Burn Notice, "Loose Ends"

The trope of We Win... Because You Didn't, or the "Antietam Defense" or the "Thermopylae Strategy", occurs in a situation where the objective is not to win outright, but rather to deny victory to the opposing party.

Another version of this trope would be where one side holds the field despite superior losses, and can then gain something by this act, or where another side loses the field, but causes superior losses and gains, say, time by this act. This does not apply if one team leaves with fewer losses, but gains nothing by the battle.

When claiming victory in this manner, a faction must be looking at long-term objectives. Since in the short term the conflict was a stalemate, the participants instead must look ahead and figure out what they can or can't do as a result of the lack of progress.

In the end, this trope is primarily a mentality, because both sides of a conflict can view this as true for their side. For instance, the imperials in the above example can also use this trope because they forced the rebels to deny themselves the resource, all losses ignored, which drastically harms rebel efforts from the imperial perspective.

Compare Pyrrhic Victory, and Pyrrhic Villainy. When applied to video games, this is Spiteful A.I. or Hold the Line when the victory occurs for the computer or the human respectively. May overlap with No MacGuffin, No Winner in some circumstances. Compare Xanatos Gambit for setups where either outcome is favorable. See also Disqualification-Induced Victory, Rage Quit, and X Must Not Win.

This trope may sometimes happen at the resolution of the main conflict, so beware of spoilers.

Alternative Title(s): We Win Because You Did Not