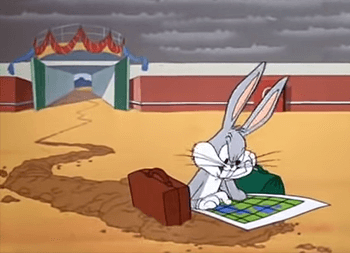 "Am I even still in North America?"
"I knew I should'a taken that left turn at Abeir-Toril."
— Xorn, Rusty and Co.
Advertisement:

Named for a frequent setup gag in Bugs Bunny cartoons, Wrong Turn at Albuquerque describes a single wrong or missed turn in a journey that will inevitably land the traveler in a place far divorced from their original goal. The plot then unfolds in one of three ways:

The gag originates from the fact that Route 66 (opened in 1926) actually intersects itself in the middle of downtown resulting where you could stand on the corner of Route 66 and Route 66note Specifically, the route was changed in 1937

, with the old alignment intersecting the new alignment. resulting in a lot of people getting turned around and taking the wrong turn.

Can be caused by Road Sign Reversal, Your Other Left, Short Cuts Make Long Delays, No Sense of Direction, or trying to follow overly complicated directions. When done in a science-fiction setting, it's Teleportation Misfire. Frequently the way to enter a Dark World or Down the Rabbit Hole. Once the traveler gets in, they may not be able to get back out, thanks to it being a Closed Circle.

In a case of Technology Marches On, things like GPS navigation and smartphones tend to make this trope less common in modern times, since now its fairly easy to have a digital map that can tell you exactly where you are, and prevent you from making any wrong turns that can send you dozens if not hundreds of miles off course until you realize your error.