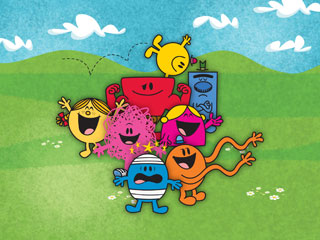 The Mr. Men Show is an animated television series adapted from the original Mr. Men animated shows of the 1970s, 1980s and 1990s, which were based on Roger Hargreaves' book series, Mr. Men and Little Misses. The Mr. Men Show, however, differs from the older versions in that it eschews the morality tale format and takes a sketch comedy approach to the characters. Each episode features short comedy sketches, dance numbers and music videos.

It was produced in Glendale, California, by Renegade Animation. The series was directed by Mark Risley; executive producers were Eyrk Casemiro and Kate Boutilier.

Each episode is made up of two 11-minute shorts. There have been two seasons, each with 26 episodes.

There is also an unrelated 1997 series also called The Mr. Men Show that redubbed the French-produced Mr. Men and Little Miss shorts and presented them with live-action comedy segments.

These tropes are CHEAP!:

Risley: Chorion didn't like her. That's the only reason.