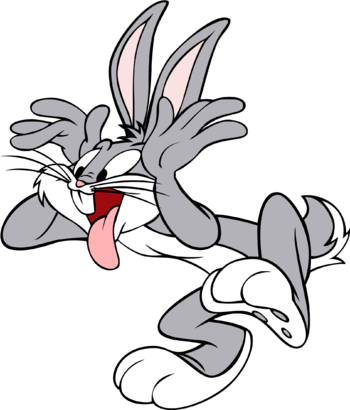 The Rascally Rabbit is a rabbit or hare that is mischievous, troublesome or tricksome. Rabbits and hares have long been depicted as tricksters in worldwide mythology, and this has carried over to modern fiction.

To a certain degree this can be Truth in Television, at least from the point of view of any farmers or gardeners trying to keep rabbits and hares from doing damage to their crops.

Since foxes, the primary enemies of rabbits in fiction, also have a reputation as tricksters, it's not uncommon to have stories about a fox and a rabbit trying to outsmart each other.

May also be a Righteous Rabbit if they're a Karmic Trickster, or even a Rabbit Magician. Compare to rabbits that are flat out evil and violent, which would be the Hair-Raising Hare, and rabbits that are used for the sake of cuteness, which is Bunnies for Cuteness. Also compare Screwball Squirrel, another small, furry animal that's often a trickster and prankster. See also Lucky Rabbit's Foot.