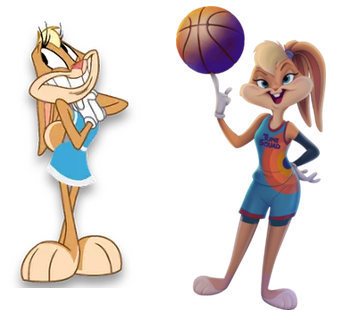 Lola Bunny is the most famous female character in the Looney Tunes franchise, as well as half of an Official Couple with Bugs Bunny. Although she wasn't created until decades after the shorts' classic era, she's the first new Looney Tune to catch on with the public since Speedy Gonzales, the Tasmanian Devil, and Witch Hazel in The '50s.

Lola was created during the planning stages of the 1996 film Space Jam. The producers wanted to include a major female character who would resonate with (and sell merchandise to) contemporary girls, and none of the existing Looney women fit the bill. They considered using Honey Bunny, who was part of the Expanded Universe but had never appeared in animation; however, the designs were unimpressive, with one animator opining that she looked like "Bugs in drag". The creators decided to introduce a new character instead, and so Lola was born.

In Space Jam, Lola is both a confident Action Girl whose basketball skills impress Michael Jordan and a seductive, scantily-clad Ms. Fanservice who is lusted after by several of the male toons, especially Bugs, who quickly makes her his Love Interest. She proved divisive with fans: some enjoyed her strong, sassy You Go, Girl! personality; others complained that she was too overly sexualized (and a bit flat) who was also too Immune to Slapstick to fit in with the other Looney Tunes.

After a few years of blink-and-you'll-miss-it cameos, Lola's next major animated role was Baby Looney Tunes, in which she was a budding athlete who was also the smartest and most sensible of the kids. Meanwhile, some fans followed the adult Lola's appearances in the Looney Tunes Comic-Book Adaptation from DC, where she began to make Bugs' Rascally Rabbit and Karmic Trickster traits her own. Lola's next appearance (sort of) was Loonatics Unleashed, an infamous Looney Tunes Spin-Off in which futuristic descendants of the original cast (including Lola's equivalent, Lexi Bunny) became Animesque Superheroes with Darker and Edgier character designs.

Lola's next project gave the blond bunny her biggest makeover yet. In the Animated Sitcom The Looney Tunes Show, she's a scatterbrained Cloud Cuckoolander/Talkative Loon who has a crush on Bugs, reversing their relationship in Space Jam. These changes made Lola the object of controversy yet again; fans of the original version disliked her ditzy new personality, while those who welcomed the changes praised this version of Lola for being a full-fledged character rather than a lust object. There were even some viewers who loved both Lolas for what they were.

Lola then got her first starring role in the Direct to Video feature Looney Tunes: Rabbits Run, a Stealth Sequel to The Looney Tunes Show which inserts those versions of the characters into an epic storyline. She's a Genius Ditz who accidentally creates a perfume that makes people invisible, then is pursued (along with her new friend Bugs) by various factions who want the formula.

Lola returned in three shorts for New Looney Tunes, two of which ("Lola Rider" and "Rhoda Derby") have her as the main character. The creative team split the difference between her Space Jam and Looney Tunes Show personas; she's still a bubbly Genki Girl, but she's also a Passionate Sports Girl who can become a Karmic Trickster when provoked.

2021 saw the release of the long-awaited sequel Space Jam: A New Legacy, which brought back the original Lola, but in a modernized, Tamer and Chaster form. In a pre-release interview, director Malcolm D. Lee said that in the first film, Lola was "very sexualized" and he wanted the New Legacy version to be "feminine without being objectified". Accordingly, Lola's proportions and uniform were made more modest — and the internet exploded.

A New Legacy makes Lola a stronger character than ever, to the point that her introductory scene has Wonder Woman anointing her as an Amazon warrior. She also becomes LeBron James' Lancer on the Tune Squad, helping him organize the toons into a functioning basketball team while respecting their unique abilities.

Lola's next project was the Edutainment Show Bugs Bunny Builders, which debuted on HBO Max and Cartoon Network's pre-school Cartoonito block in 2022. The series has Bugs, Lola and company running a wacky construction company (a la Bob the Builder), and it marks a return to the slapstick humor of the classic Looney Tunes era. Lola (along with Bugs) is the most sensible member of the team, although she has no problem joining in her friends' wacky antics.