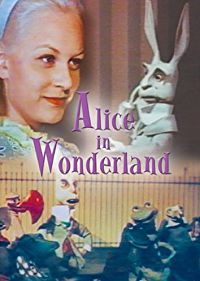 I'm upside down
I'm downside up
At last I'm having my way
The rules for what I ought and oughtn't
Are unimportant today.
—Alice
Advertisement:

A 1949 British-French film based on Lewis Carroll's book Alice's Adventures in Wonderland, directed by Dallas Bower and featuring stop motion puppets created by Lou Bunin. This adaptation features a unique Framing Device in which Lewis Carroll (Stephen Murray) tells the story to Alice Liddell (Carol Marsh) and her sisters on a boat ride. A la The Wizard of Oz, several people introduced during the live-action sequences have counterparts in Wonderland, voiced by the same actors.

This film would undoubtedly be more widely known today if it did not have the misfortune of going into production around the same time Disney was making their own Alice in Wonderland. Though the two works have nothing in common apart from being based on the same source material, Disney sensed competition and set out to crush their opponent's chances of success. A lengthy court battle ensued, during which Disney erroneously claimed to own the rights to the Alice's Adventures in Wonderland story itself. Though the case was ultimately thrown out of court, the damage was done and Bower's film was not widely distributed in the United States. Furthermore, it was banned in the UK for portraying the Queen of Hearts as a caricature of Queen Victoria. To this day it remains largely forgotten, with Disney's influence even having had a negative impact on its preservation. Because of their pre-existing arrangement with Technicolor, this film had to be shot in inferior Ansco Color, which deteriorated badly over time.

The film adaptation provides examples of the following tropes: