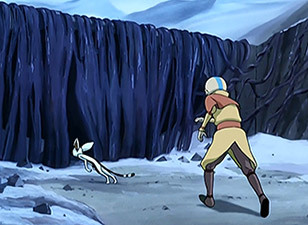 No Aang, don't go in there.
Advertisement:

The characters are chasing an animal, for example a pet that recently started to behave unusually, or trying to hunt down a wild animal, and as they get preoccupied with the chase, suddenly they notice that they were led to a strange place that they would have little chance to find on their own.

The implication seems to be that animals are inherently magical creatures, serving as the channels of The Powers That Be, and subtly guiding humans.

It can be a form of Maybe Magic, Maybe Mundane, if anyone brings up the fact that it was an amazing coincidence, sceptical characters can still reasonably argue that it was indeed just the coincidence. Huntsmen often chase The Marvelous Deer. Compare Chasing a Butterfly, where an innocent character follows a creature out of curiosity, leading them to danger.