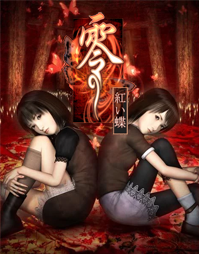 Twin sisters Mio and Mayu Amakura pay a final visit to their favorite childhood playspot in Minakami, which is soon to be destroyed in construction. Mayu follows a crimson butterfly, leading both of them trapped in an abandoned village. As they explore, they are attacked by hostile ghosts, and Mayu later goes missing. Mio discovers that she and her sister are forced to relive the events of the village's final day and becomes determined to rescue Mayu.

The game was released on the PS2 in 2003, and was given a Director's Cut onto the Xbox in 2004. The Director's Cut added a new ending, more costumes to unlock, and a higher difficulty.

The game was remade for the Wii in 2012, and released in Japan and Europe under the subtitle Deep Crimson Butterfly. The remake included updated graphics and took over the motion control-based camera mechanics from Fatal Frame IV, while also refining those mechanics. It includes two new endings, accessible areas, and an optional mission mode called Haunted House that was run by Lady Kureha, a new character added for that mode.