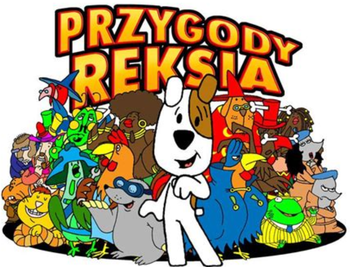 Przygody Reksia (Adventures of Reksio) - Polish series of PC point'n'click games made and published by Aidem Media, starring Reksio the dog - character known from an animation under the same title... though, apart from main character, games don't actually have much to do with animated series. Games are known for it's many shout-outs, lack of fourth wall and absurdly high level of difficulty for a kids' game.The series follows Reksio and his friends (most notably Moles, a grumpy and lazy, but loyal mole) as they go through many fascinating and dangerous adventures, with every ending with an unpredicted event forcing them to start next one imediatelly.

There are six games in series:

As well as two spin-offs:

In April 2011 production of seventh game in main series, titled "Miasto Sekretów 2" (City of Secrets 2) started, with first episode released on 20th April 2013. However, rest of the game is stuck in Development Hell for long time and it's unknown if it will ever see the daylight.

Unfortunately, except from "City of Secrets" and first episode of "City of Secrets 2", none of the games was translated to English. And, since licence to use Reksio already expired and it doesn't look like creators are going to reacquire it again, they probably never will.

Tropes featured in Treasure of Pirates:

Tropes featured in Back in Action

Tropes featured in Secret of The Third Dimension