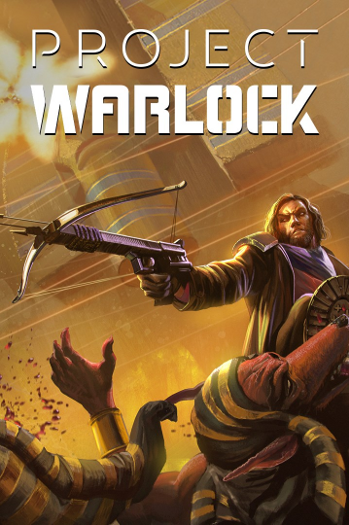 Project Warlock is an old-school style First-Person Shooter developed by Buckshot Software (which largely consists of one 19-year-old Jakub Cislo) and published by gaming company, taking inspiration from classic titles such as Wolfenstein 3-D, Doom, Heretic, and Quake.

Gameplay is what you would expect from a 90's First-Person Shooter: non-linear levels for you to explore, keys, switches, and secrets to find, fast movement speed, no Regenerating Health, and a variety of weapons and magic spells at your disposal. What sets it apart from similar games is its RPG Elements; as you Level Up from collecting treasures/finding secrets/killing shit, you can upgrade your various stats and buy different perks which act as multipliers for your stats, weapons, and magical abilities. You'll also find "Upgrade Points" throughout the game which can be spent on weapon upgrades and/or magic spells to further improve and diversify your arsenal. The game also uses lives instead of the usual quicksaves. Dying in a level means having to do it again from the start. Lose all lives and its Game Over.

The story...er, there technically isn't one. Not like that's really a problem. The gist is that you play as the Warlock, a dude who's good with guns and magic, out on a righteous quest to eradicate evil that has corrupted four different realms (Medieval, Antarctica, Ancient Egypt, and Industrial) before taking the fight to said evil on its home ground: Hell (obviously).

The game was released on GOG.com

A sequel, Project Warlock II, is currently in development, with a Kickstarter campaign to fund further development. The Early Access was released on 10 June, 2022.