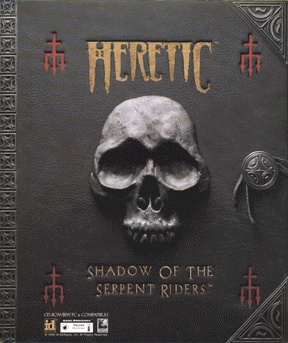 The Serpent Riders, three powerful evil beings, have enslaved the seven human kings and turned their subjects into their puppets. The Sidhe Elves, of which the player character Corvus is a member, remain unaffected by the Serpent Riders' magic powers and are declared Heretics, to be wiped off the face of the earth. The Sidhe respond by extinguishing magical candles that weaken the seven kings' armies but also the Sidhe themselves. The Serpent Riders opportunistically destroy the Sidhe elders and force the rest of them into hiding. That is, except Corvus, who won't take the near-extermination of his race lying down. He wants payback, so he sets out to find D'Sparil, the weakest Serpent Rider, and destroy him. D'Sparil's stronger big brothers, Korax and Eidolon, who left soon after all of them took over this world to conquer different worlds, will each eventually be faced by the heroes of those worlds in Hexen and Hexen II, respectively.

The gameplay differs from Doom seemingly only in setting (medieval fantasy vs. futuristic military/hell). The levels follow the same formula of "get yellow key to open door to green key which opens door to blue key which leads to exit." The original order-by-mail full game consists of three episodes of eight normal and one secret level, with two more added in a licensed retail version (Heretic: Shadow of the Serpent Riders) à la The Ultimate Doom.

The weapons seem to be medieval fantasy-themed edits of Doom's arsenal: An Elven Wand for the pistol, the Ethereal Crossbow for the shotgun, the Dragon Claw for the chaingun, the Phoenix Rod for the rocket launcher, the Hellstaff for the plasma rifle, and lightning-shooting Gauntlets of the Necromancer for the chainsaw. There is no direct equivalent to the BFG, and the player is instead offered the rapid-firing Firemace (which fires bouncing metal spheres, which, when using a Tome of Power, can kill most enemies in one shot).

One notable addition was the inventory system, which allowed the player to carry items to be used later at will. Among these are the health-pack Quartz Flask and Mystic Urn; hourglass-shaped Time Bomb of the Ancients; a simple Torch; the Tome of Power, which gives your weapons new and more powerful attacks for a limited time; and a magical egg, Morph Ovum, that turns any enemy it hits into a chicken.

Heretic also upgrades Doom's "2.5D" engine to nearly-3D: the game allows you to look up and down - and failing to do so when attacking an enemy above or below your level means your shot will miss, unlike in Doom where all interactions are really done in 2D. A powerup also enables the player to fly for a limited time. It's still not possible to create a room above another room, or objects like ledges or bridges that can be passed over and under.

Enemies included flying red gargoyles, golems, undead warriors, ophidians, disciples of D'Sparil, and were-dragons, each with melee and ranged attacks of varying power, and the melee-only Sabreclaws. Similar to Doom's use of Barons of Hell as bosses for one episode and then sub-bosses later on, the giant floating skull-like Iron Liches populate the later episodes. Standing in for the Cyberdemon are the Maulotaurs, giant minotaurs with fireball-slinging hammers.

The first Heretic (specifically, the Shadow of the Serpent Riders edition) is available on Steam

for use with DOSBox or any of the various Doom engine source ports on the net. Heretic II has not seen a digital rerelease, as of yet.

Most of the original team of these games have since left Raven Software following Activision's acquisition of the company in 1997, and they went on to form Human Head Studios. In 2019, the team then joined ZeniMax Media (who owns id Software and the distribution rights to the original Heretic and both of the Hexen games) under the name Roundhouse Studios, thereby becoming a division of Xbox Game Studios when Microsoft acquired ZeniMax in 2021.

This Game Is An Example of the Following Tropes: